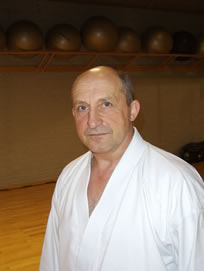 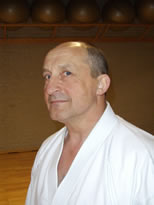 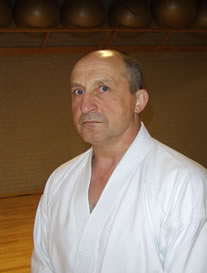 Sergio Gneo Sensei started his karate training back in the late sixties when a group of teenagers, all part of the same youth club, embarked on learning the new and exciting Japanese Martial Art of Karate. Little did they know that their secretive exploits would lead in years to come to the development of the strongest karate dojo in Belgium. And Gneo Sensei, just fifteen years old at the time, was one of them. The initially secretive training sessions just kept growing in popularity and soon the Asahi Genk Karate Club, officially recognised by the Belgian Karate Federation, was formed. It was more or less at the same time that Sergio came in contact with Miyazaki Sensei, Chief-Instructor to JKA Belgium, which would change his life forever. From then on Sergio would focus on karate: he trained as often as possible in his own club and every Saturday he travelled to Brussels to receive instruction from Miyazaki Sensei himself. In 1971 he was graded Shodan by Miyazaki Sensei. But it wasn't until 1973 that he entered the National Championships for the first time, where he made a big impression with his podium winning kata performance. His kumite result on the other hand wasn't particularly well to his liking, so he decided he had to focus more on the development of his kumite skills, but without abandoning his kata training. So he trained hard, very hard. He practised every day, sometimes twice a day. It was the only way to improve and be the best. Over the following years, Sergio Gneo Sensei established a competition record, which is, to say the least, very impressive. Just have a look at this list of highlights:

In 1985 Miyazaki Sensei appointed Sergio Assistant Chief-Instructor to JKA Belgium. As Sensei's assistant Sergio got more and more involved with the politics of karate, the national and international efforts to strengthen and further develop JKA Shotokan Karate. Miyazaki Sensei passed away unexpectedly in 1993, which left Belgian JKA Shotokan Karate in a state of shock. However, Sensei had made some arrangements and it was at his personal request that Sergio succeeded him as Chief-Instructor to JKA Belgium. Once again a great honour, a tremendous task, which he was - and still is - keen to fulfil for his Sensei. At the same time Enoeda Sensei asked Sergio, in recognition of his organisational skills and his excellent knowledge of the international karate world, to help him with the formation and development of JKA Europe within JKA World Federation. Enoeda Sensei and Miyazaki Sensei had previously been working closely together on this project, which aimed to provide and safeguard JKA Shotokan Karate of the highest standard throughout Europe. Once again Sergio accepted the trust bestowed in him: together with Enoeda Sensei, Ochi Sensei and Bura Sensei, he worked relentlessly to build a strong JKA, both in Belgium and in Europe. Today Sergio Gneo Sensei is Chief-Instructor to JKA Belgium and Administrative Director of JKA Europe. He is recognised as one of the Great JKA Masters in Europe, an excellent instructor and a skilled karate politician, who has dedicated his life to JKA karate.